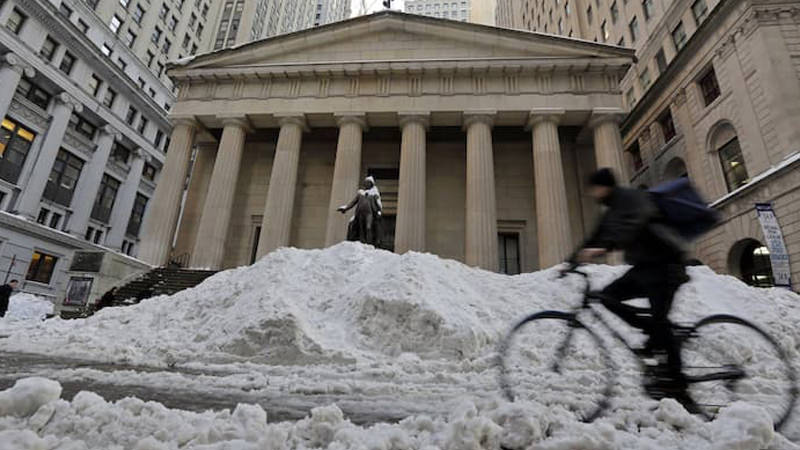 Banks are making too much money, and that is all about to change.

If your bank isn’t making enough money from you please leave a comment. I’ll wager there isn’t going to be one person comment! With bank charges, low deposit rates, everyday loans and premium loan products – they are making a fortune. Furthermore, banks are increasingly conservative with their lending. Banks have ignored their function by sitting on piles of cash and not discharging their responsibility to lend out money to fuel economies. It’s simply wrong – an abuse of their trusted position in society which is often protected by layers of government protection (legalised monopolies). Well, thats history.

It’s so outrageous, and the catalyst hasn’t been present to force a change. Until now.

The move by Central Banks (like the BOJ and ECB) into negative rates is likely to spread to other countries. In this we are seeing the start of the disintegration of monopolistic style banking practices – and a disaggregation of the banking system.

What do negative interest rates mean ?

Negative interest rates are created by Central Bank Financial Manipulation. The effect is that depositors are actually charged to keep their money in their bank account. As crazy as it sounds, several of Europe’s central banks have cut key interest rates below zero and kept them there for more than a year. Now Japan is too.

Negative interest rates are a sign of desperation and a sure sign that traditional policy options have proved ineffective and new limits need to be explored. They punish banks that hoard cash instead of extending loans to businesses or to weaker lenders.

Negative interest rates are unorthodox and have distorted financial markets. The Bank of Japan surprised markets on January 29 2016 by adopting a negative interest-rate strategy. The move came 18 months after the European Central Bank became the first major central bank to venture below zero which has continued.

The Choice of Maximum Greed

We all agree, banks have been milking us for decades. In Europe, they have been initially reluctant to pass on negative rates to clients for fear of losing customers. But recently a global Swiss private bank began to charge large depositors. The Swiss bank has decided that even though it makes a huge amount of money, it must make more. There is little doubt that passing the rates on will now spread.

Dis-aggregation of the Banking Sector

And there it is. The start of the dis-aggregation of the banking sector the world over. Sell banks stocks !

Governments need banks to lend money for the health of the economy. But the banks are preferring to sit on cash and make large profits. The only avenue left is for governments and industry groups to form their own banks. We believe this will occur. Cast your mind back to community based enterprises in the 1980s – building societies, the Teachers Union etc – groups with a charter that meant they lent to their staff/members, for the benefit of the members. Akin to Bendigo Bank here in Australia. This too will begin to happen again.

New niche providers who have relevance to their constituency will begin to emerge in the financial services industry. Banking greed will give over to banking competition – margins will decline as they learn to operate on much finer margins. The relevance of a generic bank will fade by comparison to Community style banks who have a charter to lend, not hoard. This move will cause people to shift loyalty and run from their traditional banks.

As deposits are withdrawn, the adequacy of the capital base of traditional banks become an issue. Remember banks are geared up to 20:1. Client deposits form part of a complex calculation of capital adequacy. Under normal circumstances banks walk a fine line with gearing – under duress things change quickly. The worst of all worlds is a bank collapses. More likely is that banks will need to raise equity capital regularly to support their long tailed loan books.

Those that can cast their minds back to the 1980s will recall that banks would regularly raise capital. This was when banks actually lent out their own capital and traded on price/earnings multiples of 6-7x, not twice that. Fund Managers would be able to easily predict when a capital raising would occur and would not buy the stock in anticipation of a raising – which depressed the share price. Subsequently a capital raising would be done at a discount to the already poor price. Fund Managers would take up their rights in any raising and enjoy a rise in the stock price as the bank lent its new funds. The constant cycle of dilution to equity holders meant that bank prices were in a perpetual rut with little prospect of a price/earnings re-rating. This continued until the era of grand financial manipulation (which lead us to the GFC 1).

Traditional banks have chosen to be greedy for several decades since. The consequence of that choice in the coming 1-3 years is lower margins and bigger competition (which will lower margins further) and a return to dilutive equity raisings.

What happens to deposits?

When banks pass on negative interest rates to their clients, people will initially see it as “just another bank charge”. But it won’t be long before they realise that there isn’t much point in having money in the bank. Some will put it under the bed. But more will spend it.

When people take money out of the bank they are going to end up spending it. Where, is the more important question. In 2009 toward the end of the worst of the GFC 1, banks began to free up capital again to lend. As a result, real estate and stocks boomed – almost too quickly due to the sudden movement of capital, for those that had it. We expect that real estate is also likely to benefit in the affected countries.

Stocks are quicker to respond due to the lower investment size. Stocks will be bought and investments made into Managed Funds. In Australia, up to 40% of the market is directly related to financial services. You can be guaranteed that every fund manager in the land will therefore waste approximately 40% of your investment dollars in Banks! This will vary by country. Given the diminishing profitability likely in that sector we hope people realise that other segments of the markets are better places to invest.

As a result of the spending frenzy, the affected economy will be stimulated, inflation will return and interest rates will rise. No more issue.

We are returning to an era where “boutique” financial services providers will care about their customers versus today’s cold hearted greed. This is not going to happen quickly but it’s a trend we expect to continue over several years.

In our blog called Early Indicators of the Global Financial Crisis 2 we illustrated the link between greed and the GFC 1. As we said, “When we boil it all down, it was greed and the escalation of greed which was the root cause of the GFC”.

We learnt the meaning of contagion in the GFC : the communication of disease from one organism to another by close contact. The banking system is so interconnected around the world that if one bank struggles, the entire network will struggle. The risks of the GFC 2 are escalating again. Watch this space.

Our thesis may not be perfectly correct, but one way or another something big is going to happen!