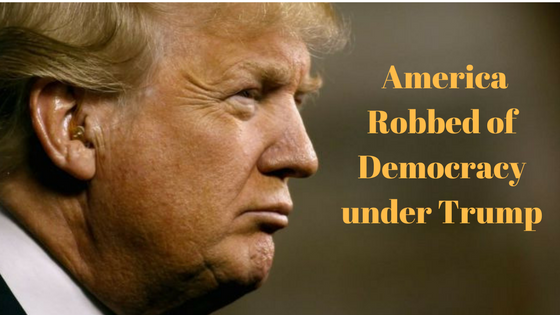 A democracy is meant to quickly respond to the wishes of the people through their elected representatives, each with an equal voice.  In a democracy, politicians can influence the will of the people, but never dictate to them.

Subscribe to our Newsletter
When people vote to install a political leader in a democracy it is expected the leader can and should deliver on their election promises.  It is the unwritten agreement between voters and their leadership.  When Mr Trump was elected we believe he intended to make good on his election promises but the arms of government have combined together to thwart his leadership.

When this happens it makes a mockery of the office of the President of the United States and renders it irrelevant.

So what happened to the agreement between the President and the people ?

The arms of government only take such actions because they do not trust the intent nor judgement of the Presidential office.  In this way they feel justified in their actions.

By blocking the work of President Trump the arms of the government are effectively snubbing democracy – which strikes at the heart of what America is meant to hold dear.

Outcomes for ‘one term’ Trump

As a result of his lack of power, President Trump has become more and more extreme in his actions in an attempt to show his power.  The intolerance he has showed minority groups is playing out in race issues at the moment.  We see these civil disturbances are leading to a lack of internal cohesiveness which will lead to economic weakness.

The stoush with North Korea is another attempt by the Presidential office to show external strength to be seen as more powerful.

In retaliation the arms of government will thwart more and more.

We will never know if Trump was a good President or not – as he has been disallowed to make change.

Once deposed from office, the arms of government will feel justified in wasting a term of office as the ‘democratic system’ has been protected.

The deposed President will be outraged at his inability to seize and use the power available to him.

The people who voted for Trump will have been forgotten. So too is the fact that they voted for him as they felt the system of democracy was not working.

Hence, the arms of government have stopped any chance at change to a system which feeds them, with the peoples wishes forgotten.

Is this a Democracy?

No way.  It is an abuse of power by the arms of government who are saying through their actions that democracy does not work.  In other words they are agreeing with the people who elected such a leader.

America: a Neutered President in a Non-functioning Democracy

The people wanted change by openly electing someone who might be able to change the system.  They knew that the cost of change might be great due to the nature of the leader.

The arms of government have said, whilst they acknowledge the need for change in the system, they will block it as it affects their power and position.
In such a situation let neither side extol the virtues of democracy.  Until America can make democracy work in their own country they shouldn’t attempt to foist it on to other countries.

The only leaders in such a country are the people who used the only tool they have to bring change, their vote.

Until America recognises the rights and wisdom of their people, it will remain a country in decay.

We believe Trump is going to be a one term President – which will be unremarkable due to his lack of internal and external power.  This will further slow economic growth.

What we can draw from all of this is a long period of uncertainty and world insecurity.  The average person out there has little hope of keeping up with this, let alone being able to predict the effect upon their investments.

What Do We Do?

We follow the changes in our Pythagoras Investment Timing Indexes. They offer a mathematical understanding of the stock market through Volatility, which show that price sensitive events are predictable from changes in Volatility (i.e. in advance of price moves). These changes lead to buy/sell recommendations.

How Do You Protect Yourself ?

Don’t be the last to know – get ahead of the crowd using Pythagoras  Investment Timing Indexes.  Our website has all the information to show you how Volatility can be utilised to alleviate the tension and improve your life when investing, especially when the going is hard like it was in the GFC 1.

How did you fare in financial year 2008/2009 when the return for the stock market was -24% ?  In that terrible year, for the 70+ stocks Pythagoras is currently offering, our recommendations returned +12% – a massive 36% better.  This could have been you.

Our 5 year returns are worth a look.

Conclusion: The Key to Making Money is Selling.

Investors know it’s rare for all stocks to go down all the time, all at once. Even in a bear market there are upward moves to profit from – if you have the right buy/sell recommendations.

Therefore Pythagoras can make money in any market regardless of the investment environment – in fact it’s best in the tough markets. We worry less about the events and their timing and focus on Volatility changes. At Pythagoras we follow changes in Volatility which precede the events. This places us at the forefront of investing.

Brendan is available on 0433 726 888 to discuss how we can assist to release you from the worry of investing and get you back to enjoying life.


Subscribe to our Newsletter
Disclaimer: The information in this document (“Information”) is not intended to constitute advice.  It is for general information only and does not take into account your individual objectives, financial situation or needs.  You should assess whether the information is appropriate for you and seek professional financial advice before relying on or making investment decisions based on the Information.  Investment products are subject to risk including the loss of income or capital invested.  Past performance is not an indicator of future performance.  Neither Pythagoras Investment Timing Index Pty Ltd ACN 147371113 (AFSL 431 238), its directors, employees and representatives (collectively, “Pythagoras”) warrant the accuracy or completeness of the Information. To the extent permitted by law,  Pythagoras disclaims all responsibility and liability for any loss or damage of any nature whatsoever which may be suffered by any person directly or indirectly.